Deep in the forest amongst leaf, wood and shrub,

There is a place where the light plays tricks.

As if it were a small child finding joy

in the shadowy patterns of the trees.

So a story unfolds,

where heroes and heroines spring from the most unlikely places.

And then, in the space between moments,

you glimpse something in the corner of your eye

And a story unfolds still

Because, even amidst the infinite possibilities

There is a presence in the silence.

It is no longer a secret place, but rather a place of communion.

Even so, a Soul can be unaware of the Silent Witness.

Mistaking the loud stillness of the forest, for solitude.

But it was just an illusion.

The shadows were playing tricks.

If you listen, the air has this sort of hush you can feel

because it is damp with water droplets (and you are thirsty).

And the scent of the earth are a jumble of woody spices,

which join hands with you

In solidarity for each and every breath.

And not a single leaf falls unknown.

And in every shadow there is a song.

And the Child laughs with joy. 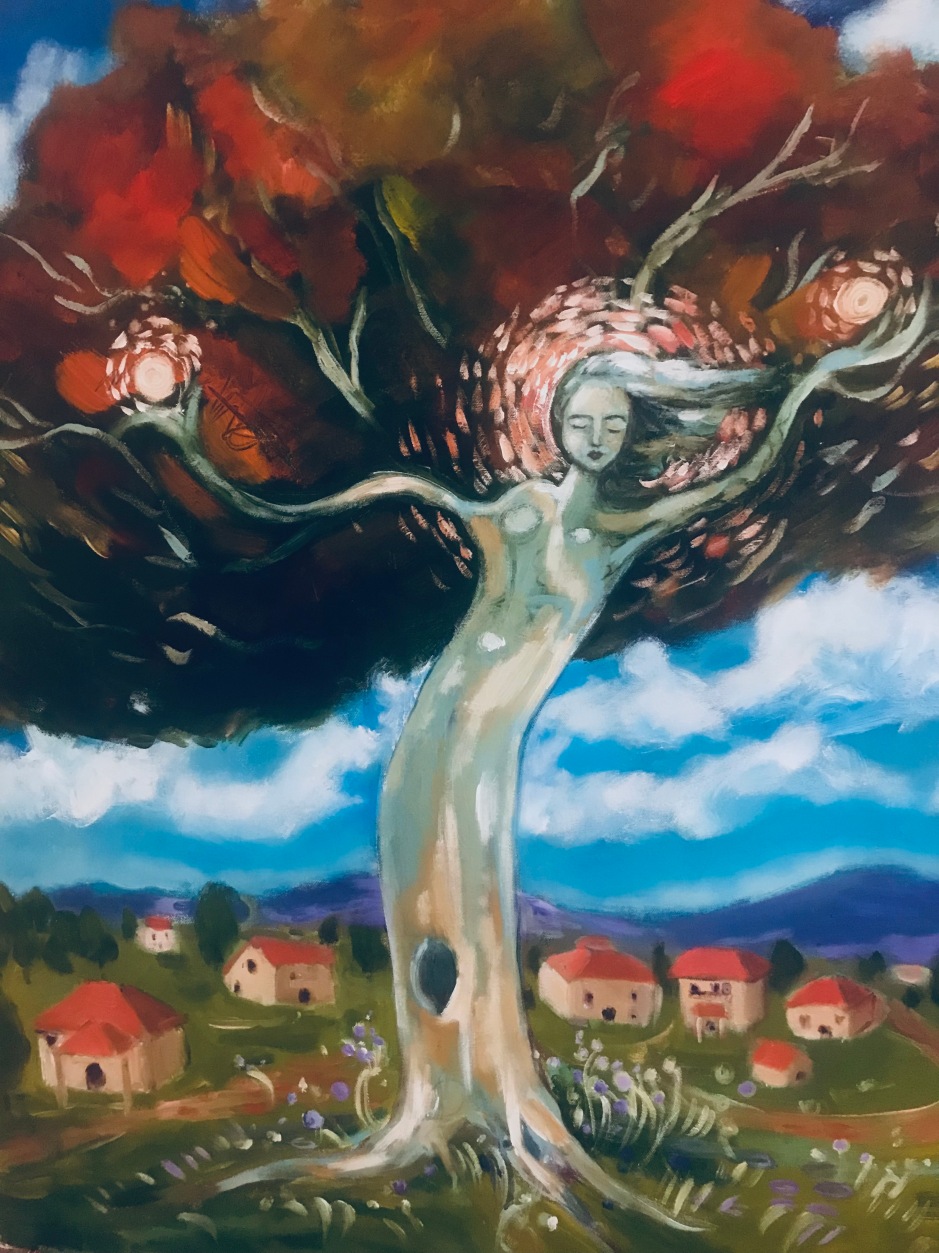 It was all an illusion
The darkness
The vertigo of it all
Like those paintings
with the black swirling lines.
I was, in fact planted deep in the soil
My face upturned to a gentle sun.
The breeze reached out wide.
From forever East to forever West.
Expanding,
Embracing.
Skipping,
Twirling,
Swaying
Behind me and before me.

I saw my right hand
full of all your gifts
Like gold.
My left hand held sorrow,
Like myrrh

My feet entwined with the ground
And you were there, too.
You are the Ground.
And I knew
in those mysterious inner knowings
that I could move
Forever East or forever West
Lay asphalt on my roads.
Devise my own schemes,
Write my own story
Make a multitude of mistakes.
And all of it like a kaleidoscope
Inside your heart.
Because, as you said,
“I Created You
Before height or depth
or East and West” 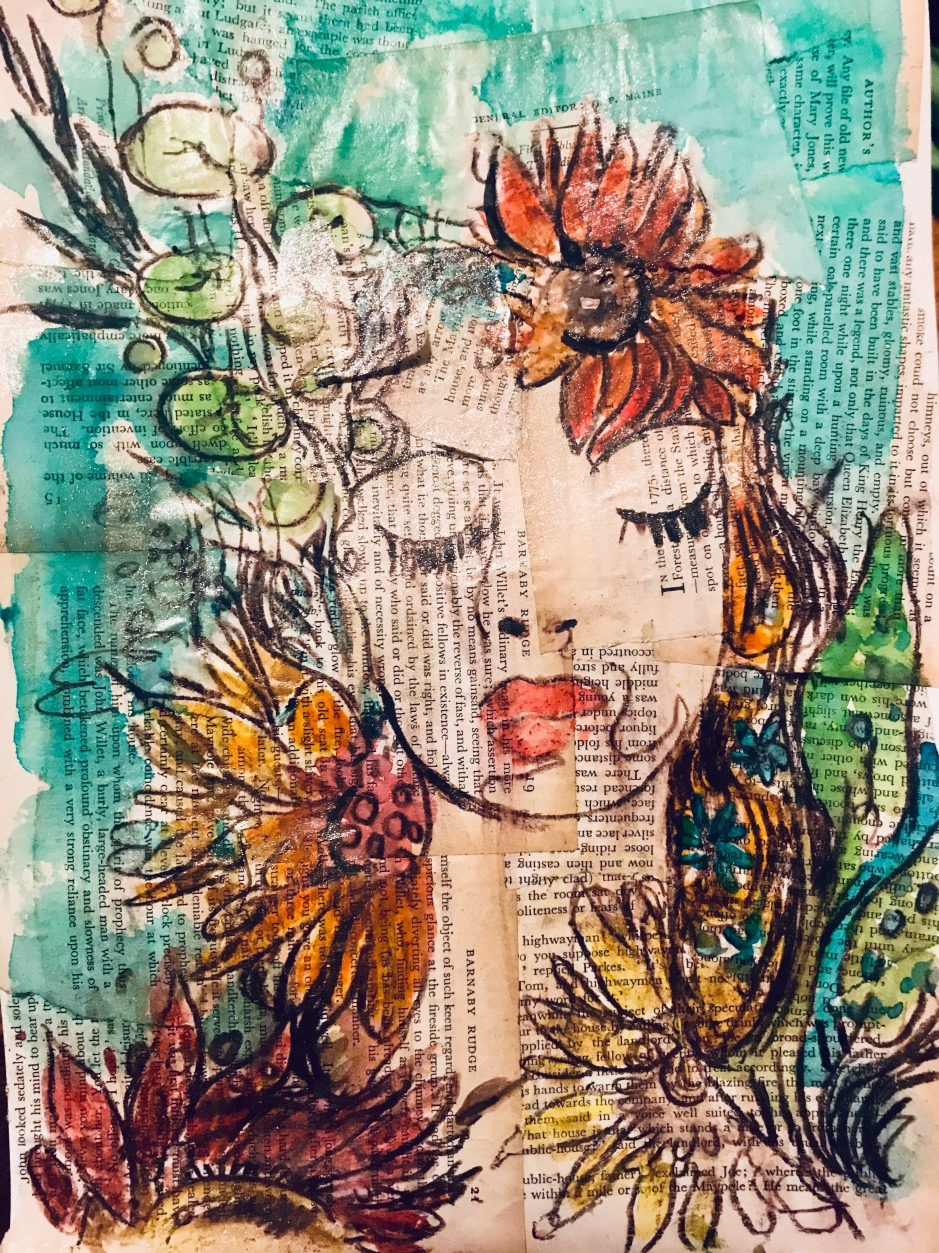 I had loads of fun creating this. It’s my firm belief that an arts practise can be a form of meditation, deepening our ability to stay present in the moment, and also soothes our nervous system. For me personally it is also an outlet for spiritual and personal growth. Hope you enjoy 🙂 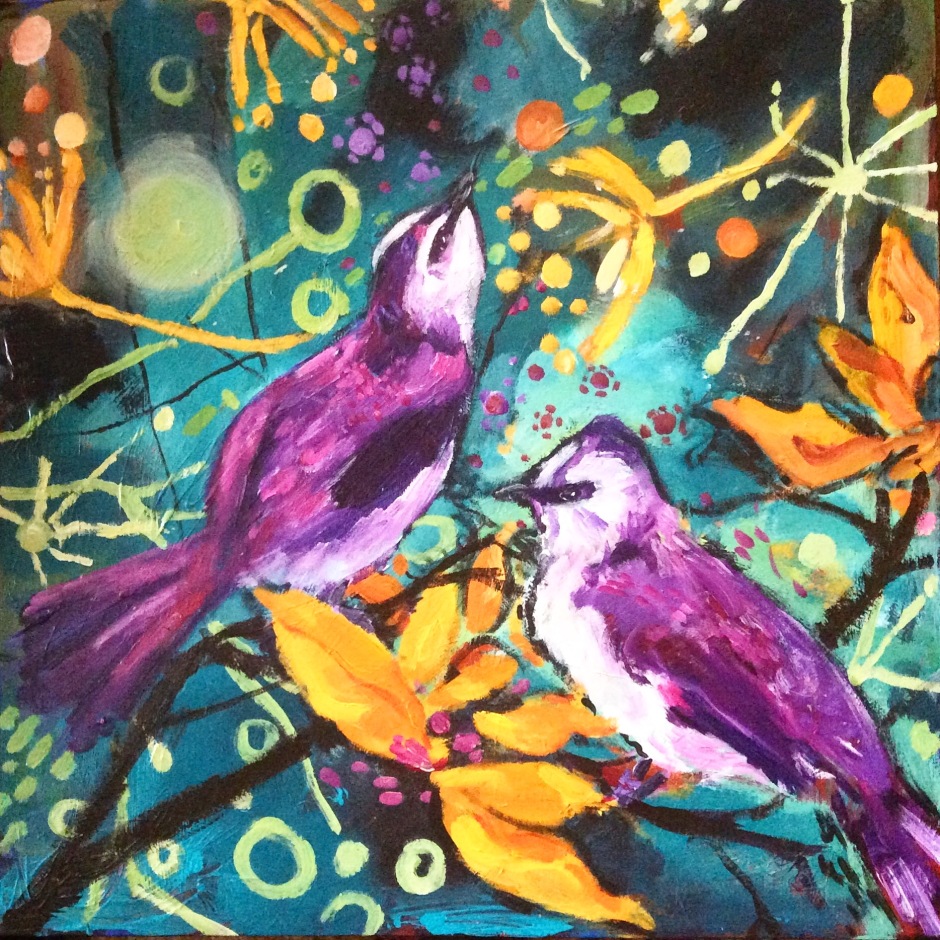 Some people invest in binoculars for the express purpose of observing bird-life. They take great delight in identifying species by their feathers and their bird-call. It’s not hard, when you think about it, to understand why these enthusiasts are so captivated by the world of birds. Birds are rather enigmatic in a way. Many species don’t even store food, their nests are temporary and purposeful, and who knows where they go when they fly away, or what their daily routine is?

Birds visit my garden often. The parrots come to eat the lilly-pilly’s that hang over my back fence, and the insanely noisy red-tailed galah’s absolutely adore splicing off branches from my numerous cape lilac trees in early summer. I adore the swallows, too that sometimes visit our industrial-town beach. To me, they all seem like winged nomads, little visitors who appear, full of chatter, then vanish. They seem to have a bird-culture we humans know nothing about. I hear them ‘talk’ to each other and I wish I knew what they are saying. It’s startling to think how eerily silent the world would be without their melodic songs (although to be honest crow and galah songs sound more like a cacophony than a melody). Nonetheless, bird calls, to me, are like the singing bowls often used in meditation. I think they help raise our vibration, or our mood. They say to us; “Wake up!”

Like natures punctuation marks, birds connect our attention to both the heavens, and the earth. It’s no small wonder that angels are depicted as having wings also. They too, inhabit the air but are closely linked with life on earth. Some say that when you find a white feather it is a sign that your guardian angels are watching over you. A black feather is thought to indicate that a deceased loved one is nearby and sending a message of love. Why wouldn’t spiritual beings send messages in such a tangible form like a feather? It’s the perfect metaphor.

A beautiful quote from Meister Eckhart serves as something to ponder, as we allow ourselves become curious about the birds we see around us everyday:

“Every living creature is full of God and a book about God”.

So next time you notice a feather on the ground, pick it up. Allow it to connect you with the unseen realms and the present moment in the material world. Let the birds of the air share both their wisdom and wonderful attributes. All we need to do is listen to their story. 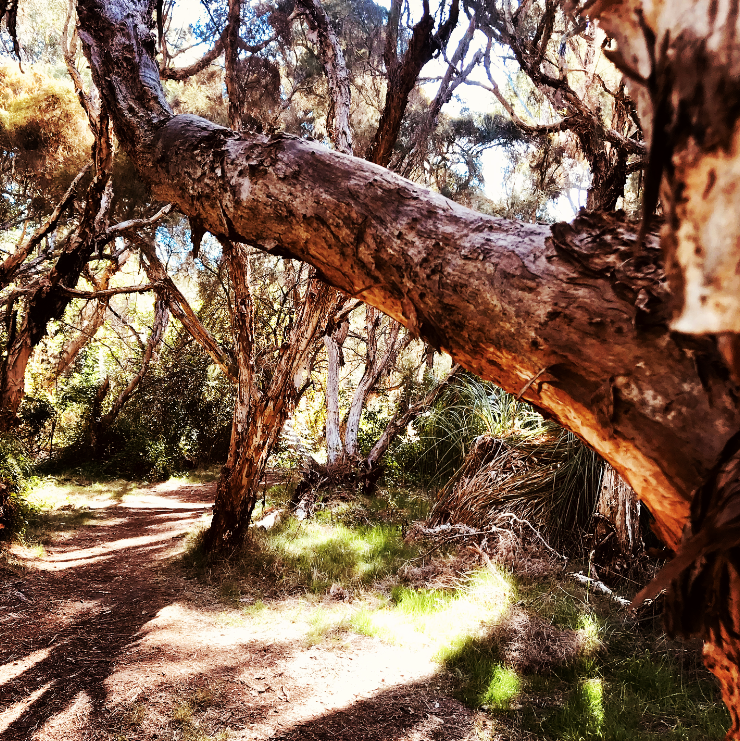 Take the walk slowly. Set your intention to be as awake and aware as possible. Because of this, or perhaps just because of a moment of grace, you may notice the shifts in the air. The breeze, the wind has it’s own voice, it’s own ebb and flow. It goes where it will and you feel it on your face, and through your clothes. Perhaps it is speaking to you.

The paperbark trees that line the path also have a voice, something to say. They are like quiet sentinels, gentle guardians…maybe a little protective; if they could speak aloud they might say; “Tread gently here”.

You keep walking, deciding to take a different path than usual, hoping to see things with new eyes (how wonderful is it to have new eyes!) Yes, a fresh perspective is what you need right now…you think: “Something may pop out into the forefront of my awareness, because I’m fully focused on being present right now!” Nature is truly a Gracious giver. You can come as you are, and she always offers all that she is, reflecting your reality but also revealing something more. An earthy groundedness.

So you come across an interesting tree, so gnarly with termite mounds, yet it is still standing. And it seems pretty content. You think it’s a good idea to stop there and just kind of stand looking at it as if to absorb what it has to communicate. Later on you will reflect on this particular gum tree, how it stood flanking he path, and how it somehow reached out to you. How you, and the tree, and God even, are all one. How loving compassion must be even more real and tangible than a nature walk. You realise the tree, in all it’s diseased state was offering a beautiful earthbound solidarity toward the experiences you are travelling through. The world is but a mirror. As as above, so below. The Divine is not untouched by suffering or illness, it would seem, according to the wise old tree.

You decide it’s time to turn back now, travelling along the same path you came. You notice that beside the trees are shadowy pockets of low foliage. It doesn’t matter that you can’t identify the bushy plants and ground covers, but they are like mini forest walks, mini worlds, with their own pathways and clearings. A hidden subculture of nature undisturbed by human hands. It’s really quite magical, like a fairytale. 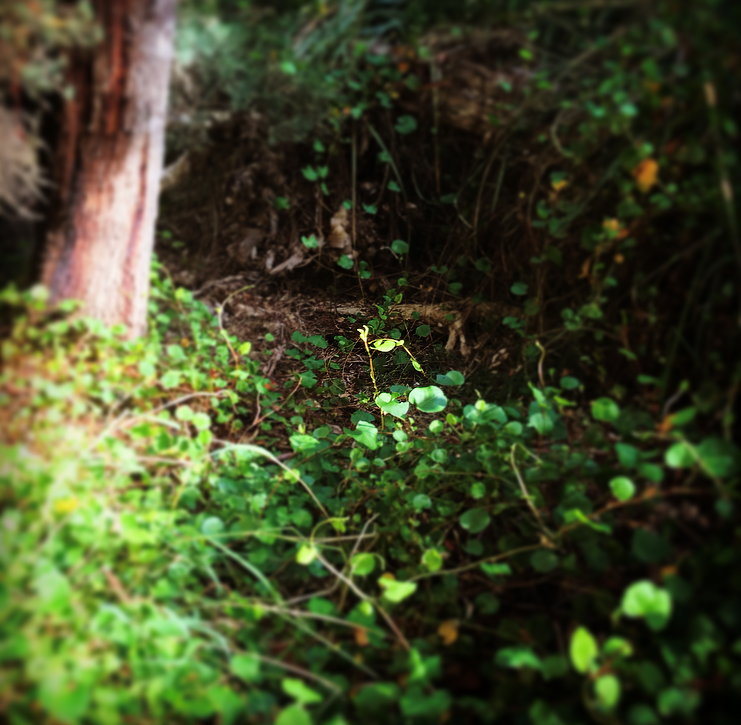 There’s so much beauty and mystery in our world. We walk beside a multitude of spirit companions, each with a different task and possessing a unique aspect of the Source of all life. May you have moments of grace where you can sense all that is around you, every good thing that is supporting you and quietly offering peace and consolation. May you learn to stop for a while and look at the trees.